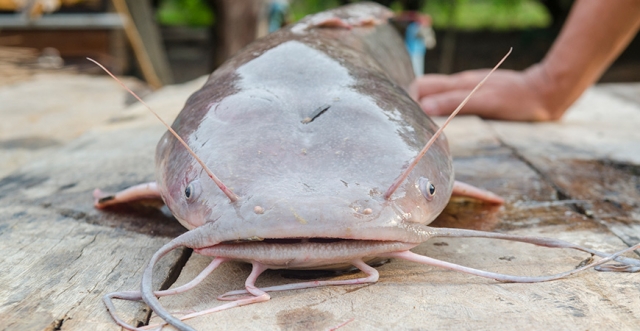 CatDaddy isn’t a bait snob, he’ll throw anything that works. Changing up the bait you are offering just may be the key to entice more hot weather bites. Don’t hold back CatDaddy says, whatever it takes, whatever you have, sling it out there and give it a try. If you don’t have a bite happening, then change things up and try something different. CatDaddy says he has been hitting the sweet spot on bluecats with a different bait than he generally uses – catalpa worms.

Catalpa worms feed on the leaves on catalpa trees and can cause a lot of damage eating away at the foliage. However, these big caterpillars are really enticing to a variety of fish species and catfish are no exception. Flatheads, bluecats and channel cats all love eating these fat, juicy worms. CatDaddy says that the juice they ooze when threaded onto a hook is the secret sauce that the catfish love so much. Because of their size, CatDaddy says you only need one to two worms at the most for a 5/0 or 6/0 hook. The smelly, greasy liquid that oozes from their bodies acts as an attractant. Because the catalpa worm isn’t prevalent in the areas that he fishes, CatDaddy says it is especially effective as the catfish are curious about the new offering. It’s one hot little worm, CatDaddy says, and it’s been really effective at producing 4 to 5 pound cats consistently.

Listen in as CatDaddy, owner and guide at CatDaddy’s Catfishin’ Adventures, talks about changing up your bait for more success. He’ll also talk about what anglers should be thinking about heading into the fall months, like stocking up on shad so you’ll have shad sides and shad guts for coming months.

Hook ‘em in the mouth,

Trav is a small town kid driven by hunting, fishing, rock/honky-tonk music, cold beer and his wife and kids. Being raised in a rural area surrounded by wildlife and lacking the luxurious amenities of big city life might be challenging to some; however, to Trav, it was an utter blessing. From his inception on, Trav has spent his life outdoors, he was taught at a very young age to hunt and fish and over the years these skills have molded him into a self-sufficient outdoorsman that strives to live a sustainable and God fearing lifestyle. When Trav isn’t behind the mic he’s either in the woods or on the water sharing his passion and love for the outdoors with his family and friends. So, don't bother searching for him online and you couldn’t pay him to own an iPhone, but let me reassure you of this: If there’s hunting and fishing, cold beer on tap and shaving isn’t required, he’s certainly not too far. What you see is what you get with Trav and to sum him up is simple, he doesn’t ask for a lot and he’ll never need much, a rifle, a bow, the love of his good looking wife and to be all that his children will ever need!

More in this category: « Panfishing and the Outdoor Experience with The MudbuMs Aging Whitetails on the Hoof »
back to top

Predator Pulse
Slipping into a Setup

Predator Pulse
Calling In the Wind

The Revolution with Jim & Trav is a voice for the outdoors on the airwaves. The Revolution with Jim & Trav dominates the outdoor radio segment as the fastest growing nationally syndicated radio show and podcast dedicated to outdoor enthusiasts. This weekly radio show and podcast aims to accomplish a simple goal: to promote the participation in and enjoyment of outdoor activities, especially hunting and fishing.